Ready for wonderful views, great music, top-notch food and a land that can soothe the spirit? This is the place for you.

A quintet of cities

Despite their proximity, each of Northern Ireland’s five cities has its own distinct character. Belfast is the birthplace of Titanic, a foodie destination and musical hotspot. Derry-Londonderry has its fascinating history framed by 400-year-old stone walls, not to mention a lively culture scene; while Armagh’s two cathedrals illustrate its strong ties with St Patrick that stretch back more than 15 centuries. Two smaller cities make up our quintet – both raised in status during Queen Elizabeth’s Golden Jubilee celebrations: Lisburn, at almost touching distance from Belfast, boasts attractive 18th century streetscapes and a distinctive legacy in linen; and Newry, a modern urban hub laden with shops, Christian heritage and ancient castles.

Dramatic cliff-top castles, vast white-sand beaches, charming little villages – the Causeway Coastal Route delivers an incredible amount of beauty within just 195 miles. Frequently cited as one of the best touring routes in the world, it’s no surprise that the Causeway Coastal Route is a genuine joy to drive. Starting in the vibrant city of Belfast and finishing in Derry~Londonderry (or the other way around if you prefer), the route is all about taking your time and savouring the sights, sounds and flavours of this spellbinding coastline. The breathtakingly varied scenery includes the Gobbins Cliff Path, the Glens of Antrim, the exhilarating Carrick-a-Rede rope bridge and the magnificent Giant’s Causeway. On the way, you’ll pass Royal Portrush Golf Club (home of The Open 2019), and Portstewart Golf Club (venue for the Irish Open 2017). Both outstanding golf courses that draw players from all over the world, and are welcoming to non-members so you can follow the footsteps of the greats as you tread the fairways. 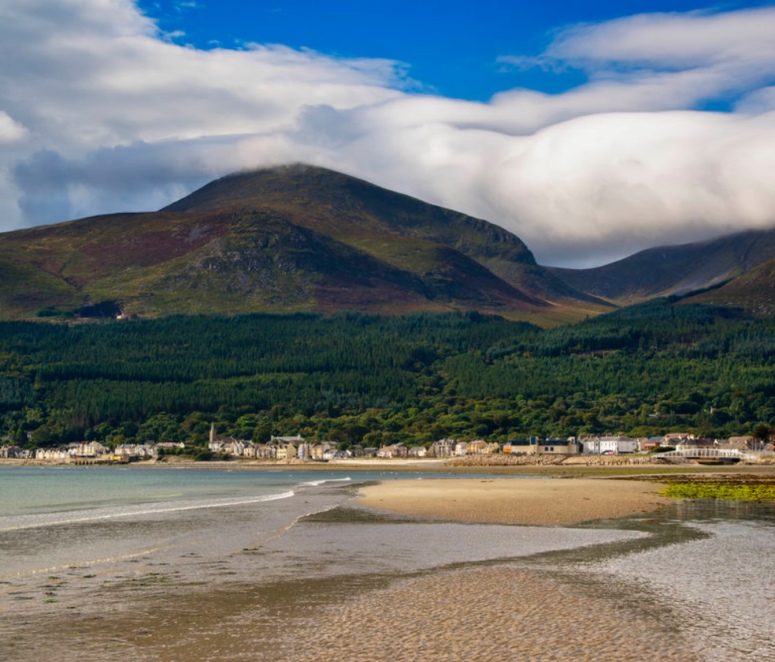 Head for the hills. The Sperrin Mountains on the border of counties Tyrone and Londonderry form the largest mountain range in Ireland, and have beguiled people for millennia: here you’ll find the ancient Beaghmore Stone Circles, more than 90 of them, aligned with the heavens. The Mourne Mountains in County Down, meanwhile, are another must-see, full of oddities, such as the Mourne Wall that stretches across the summits, paths made by 18th century smugglers, plus Slieve Donard, the highest peak at 853 metres. It’s said such was the beauty of the Mournes that Belfast-native CS Lewis drew inspiration for his description of Narnia. Conquer the peaks alone or join the party…both the Sperrins and the Mournes have walking festivals.

Swaying reeds. Rippling waters. Fields blanketed in vivid green. The Fermanagh Lakelands are a place of profound tranquillity, offering a continuous stream of quiet moments and hidden gems, from ancient statues to forest trails. From its rugged peaks to its gentle valleys, this landscape has been shaped by water, and there’s fantastic coarse and game fishing to be had. Full of lakes, rivers and inlets scattered with mysterious islands (154 of them, to be precise), take a boat or, even better, paddle yourself by kayak over the silent waters of Lough Erne, where Fermanagh’s islands offer ruined churches and ancient carved statues. Devenish is one of the most famous. A monastery was established here in the 6th century, before being raided by Vikings and later burned. But the oratory of St Molaise and the 12th century round tower have survived, painting a vivid picture of the island’s monastic past. Keep an eye out, too, for Boa Island, with its 1,500-year-old statues; White Island, also boasting ancient stone figures; and Lusty Beg, a 30-hectare resort with self-catering and B&B accommodation, along with activities that range from clay-pigeon shooting to off-road driving.

Set in picturesque locations, Fermanagh’s magnificent mansions and gardens bask in beauty. There’s Crom Estate, an 810-hectare demesne on the shores of Upper Lough Erne; there’s Castle Coole, one of Ireland’s finest neo-classical mansions with sumptuous Regency interiors; and there’s Florence Court, the former home to the Earls of Enniskillen, with glorious walks through native woodland.

This landscapes of Northern Ireland have stirred many imaginations, including that of Belfast-born author CS Lewis, creator of Narnia. But Narnia is only one imaginary world inspired by the views. HBO’s smash hit, Game of Thrones, has been filmed all over, earning Northern Ireland the deserved moniker: Game of Thrones Territory. Avid fans can grab their broadswords and take a tour of the filming locations, from Cushendun Caves to Castle Ward, Dark Hedges to the gothic follies of Tollymore Forest Park.

With a deep respect for local ingredients, boundary-pushing chefs and a convivial atmosphere in pubs and restaurants, Northern Ireland is one of Europe’s most exciting food and drink destinations. The rich land and waters provide the ingredients and you can even learn how to use them yourself at Belle Isle cookery school in Fermanagh.
Another booming industry to satisfy discerning tastes is that of craft beer. Small breweries have popped up all over the place, but Hilden and Whitewater are the most established – although even Hilden, the older, is only 35 years old. For something more historic, settle down with a wee dram of Bushmills after a visit to Ireland’s oldest working distillery in County Antrim. You deserve it after the adventures you’ve been on!

published with permission from www.ireland.com